Sun, 12 Jun 2022
This summer we again combined with our friends from Horsley Choral Society for our concert "Gloriana" to celebrate the Queen's Platinum Jubilee. The concert featured Haydn's Nelson Mass, Zadok the Priest and Parry's I was Glad, and lighter numbers such as Abba's Dancing Queen.

Fri, 8 Apr 2022
The 2022 festival took place recently, in a slightly different format to usual, due to the uncertainty over the resumption of choral activities. The opening concert, Handel's Messiah, had been postponed until June 19th, but unfortunately this has now been cancelled. The Festival itself was reduced from its normal three days down to two, with Oxshott participating on the Friday. Competition was limited, and optional, but the afternoon rehearsals and evening concerts took place as usual. Our own Val Beynon presented the prizes on the Friday evening, in recognition of her long tenure as a Leith Hill conductor.

There were two "main" works - Beethoven's Mass in C and Jonathan Willcocks' Song for Mary. In a break with tradition, choirs were allowed to choose their own repertoire in other categories, which was presented as a 20-minute recital. The choice of music had to include a piece by a living composer, an a capella piece, an accompanied piece and two extracts from the main works.

On the Saturday, the main works were Gershwin's Porgy and Bess and Bob Cholcott's A Little Jazz Mass.

Sun, 5 Dec 2021
We sang excerpts from Handel's Messiah, and a selection of Christmas music old and new. Unfortunately there was no interval to be enlivened by the customary wine and hot mince pies and sausage rolls. Despite the audience size being limited by Covid-19 precautions, we managed to raise £410 for our Christmas charity, B@titude, a shop in Leatherhead which, according to its website, "sells second-hand babies (!) and children's clothes", and provides a hub for families to meet in the north Leatherhead area. 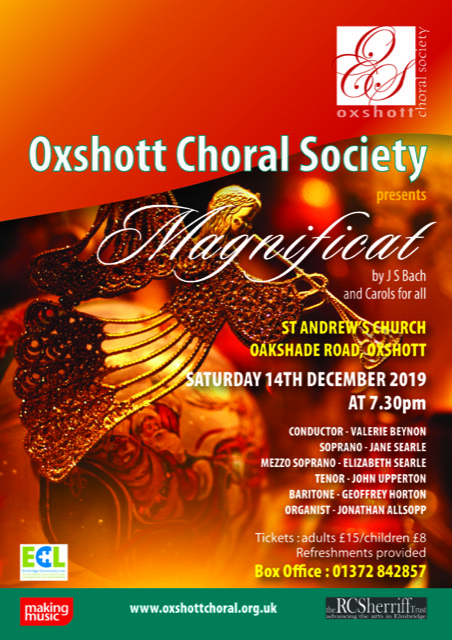 Our 2019 Christmas concert, in St Andrew's Church, Oxshott, on Saturday December 14th included J S Bach's Magnificat in D, and a selection of Christmas music old and new. In the interval there was the usual irresistible allure of wine and hot mince pies and sausage rolls.
Our chosen charity this year was Elmbridge Community Link. 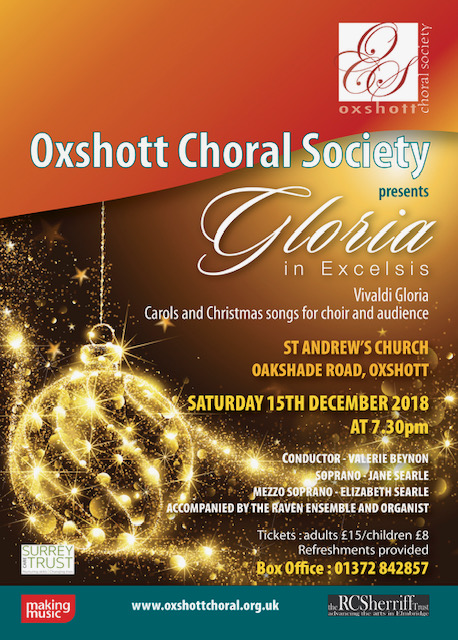 Our 2018 Christmas concert in Oxshott was again given to a full house. The featured work was Vivaldi's Gloria, accompanied by Christmas carols for choir and audience, and with the traditional hot mince pies and sausage rolls in the interval. The retiring collection raised over £1,000 for our chosen charity, Surrey Care Trust.. 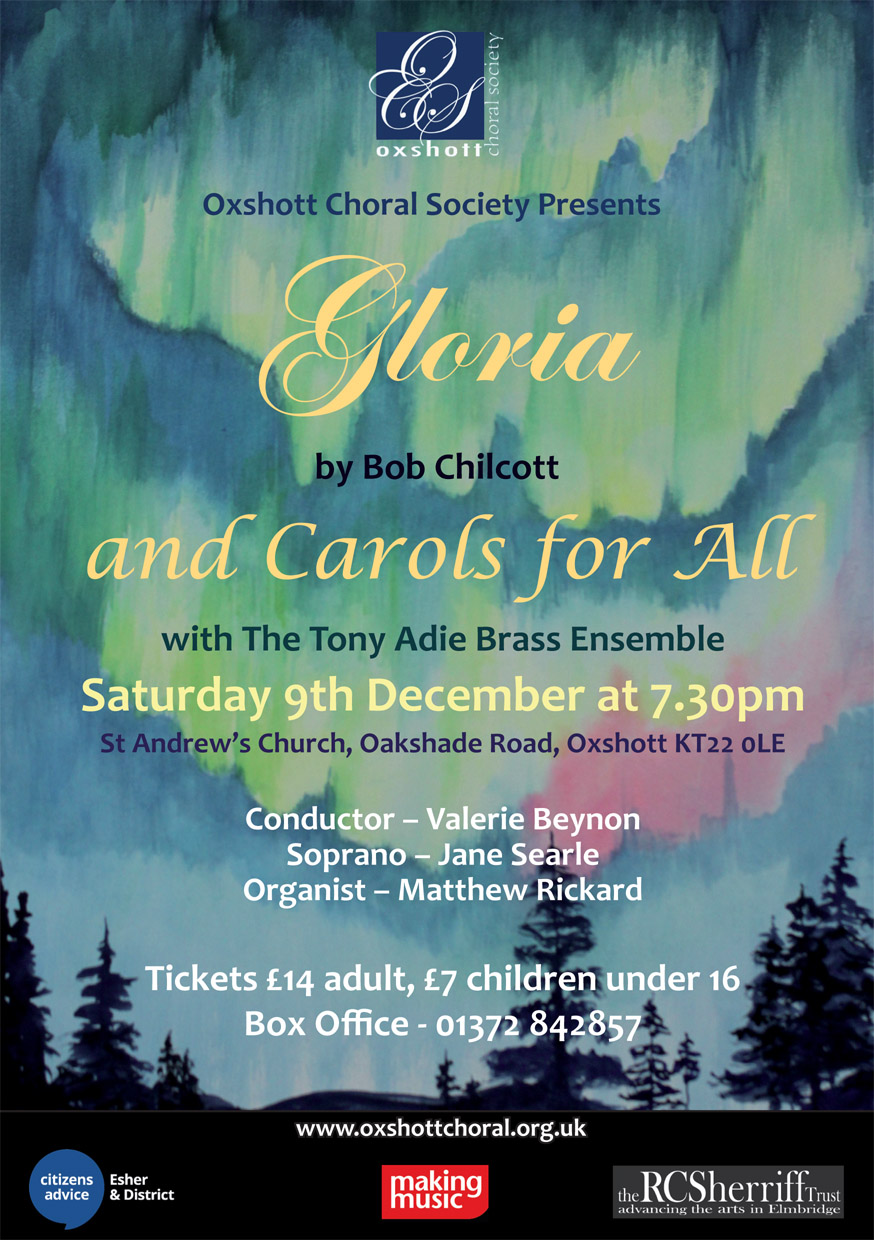 Carols and other seasonal songs were accompanied on the organ by Matthew Rickard and the Tony Adie Brass Ensemble.. 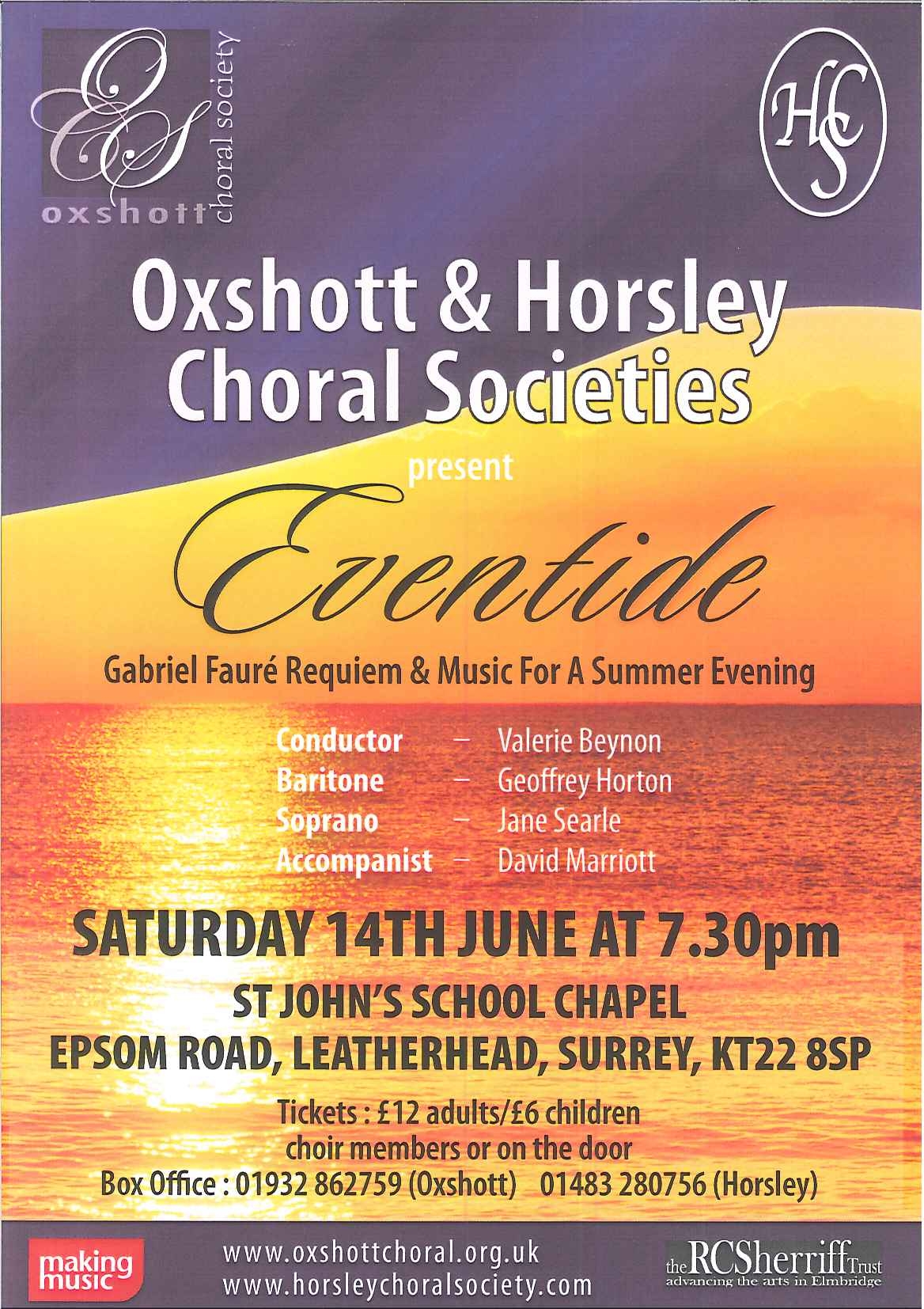 On Saturday June 15th, Oxshott Choral Society presented "Eventide", a programme of music for a summer evening, which included Faure's ever-popular Requiem and the Canteen of Jean Racique. We were again joined by singers from Horsley Choral Society, but unusually the concert was not held in St. Andrew's Church Oxshott, our normal venue, because of the church's re-ordering. Instead we performed in the chapel at St. John's School Leatherhead and in spite of the move the concert attracted a large and enthusiastic audience.

Sat, 11 Dec 2010
In our Christmas concert, entitled "Gloria", we sang John Rutter's Gloria, fittingly, and Vaughan Williams' Fantasia on Christmas Carols. Baritone Davis Salmon deputised for the indisposed Geoffrey Horton, Robin Wells accompanied on the organ and piano, and trumpeter Roy Falshaw contributed some fine solo pieces. The audience joined in with some carols and christmas songs after seasonal refreshments. Profits from the evening were donated to The Children's Trust, Tadworth, who provide care, education, therapy and rehabilitation to children with multiple disabilities. Find out more at The Children's Trust website.